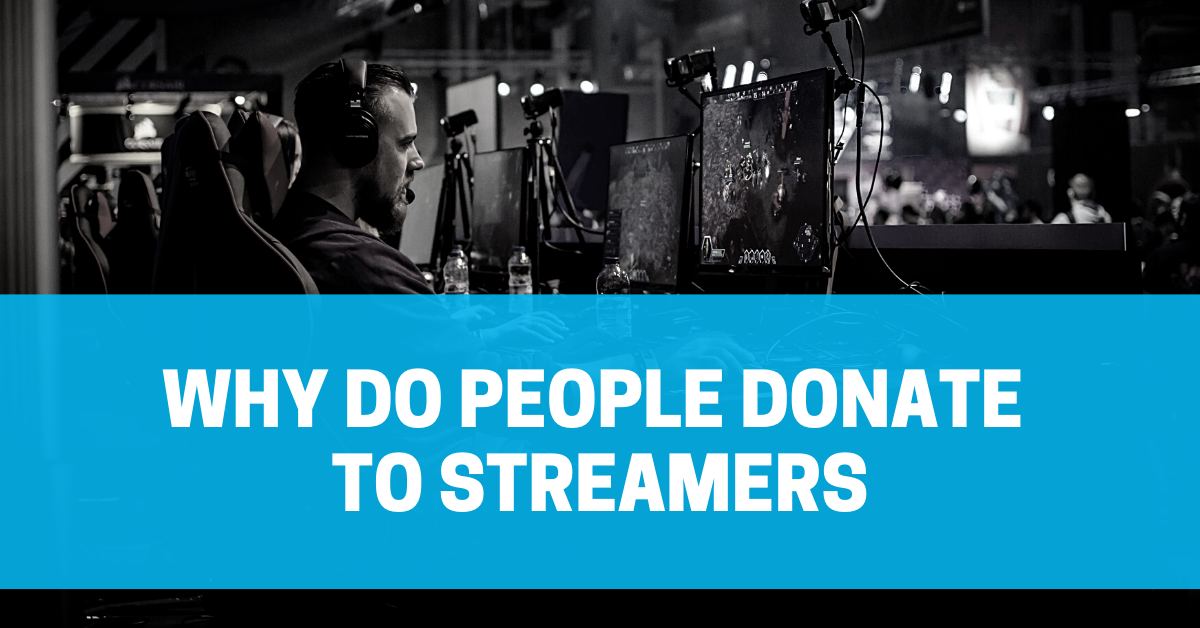 Why do people donate to streamers? The act of donating money to a streamer can be difficult to comprehend for the non-fans. However, “digital patronage” is on the rise stronger than ever in the past and coming years. The popularity surge for the virtual industry is due to COVID-19’s impact. If in-person connection is limited, the next best thing is live-streaming. This new culture is strong and here to stay.

In fact, searches for various live streaming platforms increased three to five times more after the pandemic outbreak. Other than that, the streaming time and watch time have a notable increase in length. In this article, we’ll dive into the psychology of why people donate to streamers, but first, let’s discuss…

The world of live streaming platforms is very competitive for streamers, especially due to the growing interest in becoming a streamer for a living. Let’s say, on average, an “expert” streamer earns between $3,000 to $5,000 per month while playing around 40 hours a week.

A streamer’s income is from:

For a gamer, being able to earn an income while enjoying a hobby is a dream come true. It’s no wonder why the streamer community grows in number. Here is a list of top live game streaming platforms:

The video quality for this streaming platform reaches up to 4K resolution. Youtube Gaming launched last 2015 to challenge Twitch’s supremacy.

Afreeca TV streaming platform that professional gamers prefer the most. It offers a user-friendly live streaming option for gamers. However, the platform is considered complicated on the viewer’s end.

Last 2018, Facebook joined the game streaming wagon by launching its own hub. It’s a platform that can compete amongst competitors such as Youtube Gaming and Twitch.

Amongst the best live game streaming platforms, Twitch is still considered as “King” in the community. On the other hand, some streamers admit they earn more money on Facebook’s streaming platform compared to Youtube and Twitch. Overall, Twitch dominates other platforms in the hours streamed and hours watched section. As one of the top live streaming platform, the next question is:

Why Donate to Twitch Streamers

If you search on Google, there are many “big” donations gifted by fans to their favorite streamers. Again, if you’re not part of this community, this gesture can be over-the-top. Well, some fans donate in small values while others are there for support and hype. One thing is for sure; this is a community that has a lot of supporters.

In fact, Twitch has more than 3.8 million unique streamers, and the number keeps growing as you read this article. Last 2019, the total revenue for this platform is estimated over $1.54 billion. From the total revenue, $300 million was generated on advertising alone.

So, for a stranger, donations to a popular Twitch streamer don’t make sense. Now let’s dive into the details to answer our main question: “why do people donate to streamers?”

Get a “Shout Out”

Giving a donation is one way to get noticed by a streamer. Usually, if a streamer has a lot of active viewers, the chat section scrolls too fast. So for a fan who wants to stand out from hundreds or even thousands of viewers, some give monetary support.

For a person, the feeling of wanting to be noticed by a person you idolize can be relatable. After receiving a donation, streamers usually give donors a shout-out. Sometimes, they even allow the donors to have the privilege of being a part of the stream for a few seconds.

Fans Want to “Cheer” for their Favorite Streamers

Other than receiving recognition, a donation can be a gesture from a fan to “cheer” for their favorite streamers. One of the most asked questions regarding Twitch donations is, “why give money to these millionaires?” That is from a non-fan’s point of view of course. Those who truly do not know how this community functions.

But what if we imagine OUR favorite persons as the streamer. They can be a sports figure, a singer, a K-pop idol, or even an actor. Most of us might have an experience where we wanted to send a gift to our idols to “cheer” them up or as a sign of our support for their art. In this case, streaming is a part of entertainment for this community.

So it’s perfectly understandable if someone wants to give monetary support. In the end, you do you. As long as you’re happy.

One Way to Show Appreciation

As stated above, streaming is a form of entertainment for the gamer community. So for the majority, we can consider fan donations the same as giving tips to waiters. We usually give a tip to waiters, servers, or people that delivered a satisfactory service. In this case, it’s a tip for the entertainment received.

So for fans who consume a Twitch user’s content on a daily basis, giving out monetary support for the entertainment is understandable. This also relates to your favorite online writer, digital artists, and other creatives that have a Ko-Fi, Buy Me a Coffee, or Patreon button. For streamers, this content is a form of art.

Also, to fans it’s not about a streamer’s wealth, those who give monetary support don’t think like that. As another example, think about influential figures who gave you life-changing advice or uplifted you during sad times. Any act that made your life feel better. If you think of it like that, then the amount of donation, support, or tip is understandable.

Most donors give tips because they see a streamer’s effort to deliver quality entertainment for their fans. As streaming is currently a free source of entertainment, the viewers get to enjoy their favorite streamers without a subscription plan or monthly billing. However, streaming takes time, money, effort, and electricity.

So, in the end, fans see the effort and generously give out tips for the streamers. We are individuals who got used to paying to receive any form of service, entertainment, or advice. Due to this, fans feel a sense of obligation to give any amount. Let’s be honest, we want to pay people who deserve it.

Let’s admit it, giving out gifts makes us feel good about ourselves. The act of giving leaves a certain satisfaction to us. In fact, this simple practice makes our brains happy and can be a major mood booster.

So on the subject of donating to streamers, fans give support because this action allows them to feel good about themselves. Besides, the donations don’t always go to popular streamers. Loyal fans of small-time streamers also give monetary support. In this case, donations are a big help for those who are only starting out. Aside from that, fans want to support their favorite streamers in improving their gadgets to improve the quality of their source of entertainment.

Some users admit that tipping became a habitual thing. For them, giving out tips to streamers became a ritual. Besides, seeing your username highlighted gives a weird feeling of satisfaction. If a user gets used to that feeling, only watching a stream will eventually feel lacking.

The most successful streamers limited the amount of donations they received from followers. Of course, if we consider the reasons written above, some fans can give huge amounts to their favorites without blinking an eye. Although these streamers appreciate the thought behind the gestures, they took matters into their own hands.

Back in 2019, Digsuised Toast started this streamer domino by announcing he would no longer accept fan donations. Now, famous steamers such as Corpse Husband, Pewdiepie, and Pokimane limited their fan’s donations. In fact, Pewdiepie announced to his followers that he would no longer accept monetary support. Meanwhile, Pokimane gave a donation cap of five dollars to fans. On the other hand, Corpse Husband asked not to donate in large amounts.

So, why did these streamers decide to limit or stop accepting donations?

The answer is simple, they are earning enough from their other income streams. Due to their fan’s endless support, it helped them reach the popularity they have now. So, it’s understandable why the three streamers asked fans to stop or limit the monetary support.

In the end, we get to understand the psychology of why do people donate to streamers. It’s not about giving out money to help out small Twitch users or adding luxury spendings to wealthy users. The gesture of giving out monetary support is simply about a simple reward system. In most cases, rewards motivate a person to do better, it also shows the appreciation of the giver.

So, if you’re still trying to wrap your brain around this donation system. Just think it’s the same as giving gifts to your favorite persons.